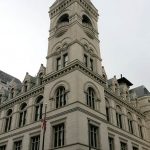 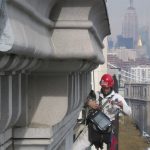 The Conrad B. Duberstein U.S. Bankruptcy Courthouse consists of two buildings. The main façade of the original 1892 portion of the building facing Johnston Street was designed in the Romanesque Revival style and is clad entirely in Bodwell Blue granite from Vinalhaven, ME. The seven-story Romanesque Revival 1933 addition fills the rest of the city block bordered by Tillary Street to the north, Adams Street to the east and Cadman Plaza to the west. On the 1933 building, granite from Stonington, ME is used as cladding on the first floor, terra cotta with granite window surrounds is used on the second floor and the upper floors are clad entirely in terra cotta. The glazed terra cotta on the 1933 addition was manufactured by the Federal Seaboard Terra Cotta Corporation in Woodbridge, NJ to match the granite of the 1892 Building.