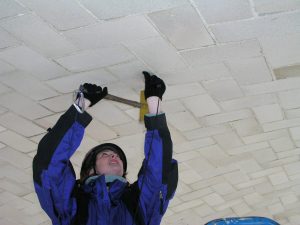 As part of our work inspecting, investigating and documenting historic buildings, Vertical Access has worked on original Guastavino tile ceilings, vaults and domes in and around the New York metropolitan area and beyond.

Rafael Guastavino is an architect who was born in Valencia, Spain in 1842. He immigrated to the United States from Spain in 1881 and once here, he proceeded to design and build some of the most recognizable architectural gems of Manhattan. Yet, his name is still largely unrecognized. His signature soaring vaulted ceilings are constructed of thin interlocking clay tiles and mortar can be found in thousands of buildings throughout the world.

Vertical Access staff have undertaken years of study and research into Guastavino tile materials and production techniques and have presented their findings to numerous professional associations.

Kent Diebolt, founding partner of Vertical Access, travels frequently to Barcelona, Spain as part of his studies into Guastavino construction techniques and has delivered lectures and workshops at universities and industry associations on his findings.

Kelly Streeter, PE – partner and structural engineer with VA – has undertaken a testing and research program to evaluate the acoustic properties of Guastavino tiles and the use of non-destructive evaluation of Guastavino tile as an assessment tool. As part of her research, she has conducted two pilot studies to measure pulse velocity and frequency responses at Guastavino vaults in New York City’s St. Thomas Church and Battery Maritime Building for the purposes of determining the feasibility of using ultrasonic frequency response for Guastavino tile structure evaluations. This work has informed Kelly’s additional research involving the construction of full-scale mock-ups of Guastavino vaults for the investigation of non-destructive evaluation techniques in a controlled environment.

El Architecto de Nueva York,  is a documentary film about the accomplished life of Rafael Guastavino. This award-winning film is a celebration of his life and brings long overdue awareness and enlightenment about his contributions to architecture in cities worldwide.

The film was honored with a Golden Dolphin Award at the Cannes Corporate Media & TV Awards on October 13, 2016. Directed by Eva Vizcarra and produced by RTVE/Endora Producciones, the film won in the category of History and Civilization.

Kent Diebolt, founder of Vertical Access, and Berta de Miguel both appear in the film guiding viewers through iconic examples of Guastavino’s work in New York City, such as Grand Central Terminal, the Guastavino Oyster Bar, Ellis Island and more.