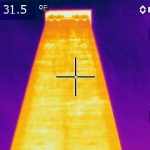 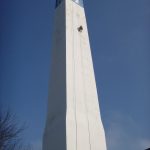 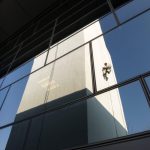 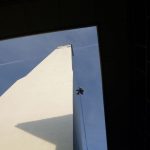 Vertical Access was retained by N.K. Bhandari Architecture & Engineering, P.C. to assist with the investigation of paint coatings on the exterior of the Little Joe Draw Tower in Corning, NY. Discoloration of the paint coating was observed from the ground, requiring hands-on and close-visual inspection in order to determine the causes. The scope of work included investigation and documentation of existing conditions, as well as live-feed video and discussion of conditions in real time. Vertical Access also performed paint adhesion tests at representative areas on each of the four sides of the tower.

The Little Joe Draw Tower was built by Corning Glass Works (now Corning Incorporated) in 1912 for the production of glass thermometer tubes. The tower is constructed of poured-in-place concrete and is topped with a square cupola. Using the vertical draw method, hot glass was pulled up through the interior of the 175-foot tower, creating a long, thin tube that was then cut to length. Glass production at the tower ceased in 1973, but the structure is preserved as a recognizable icon of Corning Incorporated and the company’s industrial and historic role in the city of Corning. A painted illustration on all four sides near the top of the tower shaft depicts the silhouette of a glassblower, “Little Joe.”