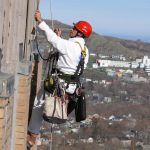 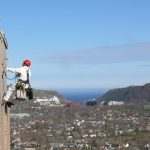 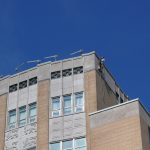 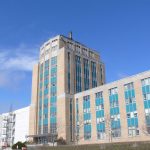 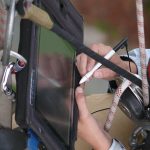 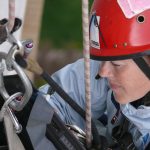 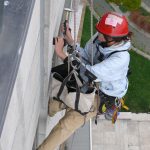 The Government of Newfoundland and Labrador initiated a multi-phase renovation of the Confederation Building, the seat of the assembly, and other provincial offices in 2008. During exterior renovations of one of the wings of the building, it became evident that some of the stone trim suffered from blind delamination, separation between bedding planes that was not visible on the surface of the units. To help in planning and budgeting for the upcoming phase of the tower renovation, Vertical Access was retained to perform the hands-on survey of the upper portions of the tower. The hands-on survey together with acoustic emission testing that VA developed as a pilot project, helped the project team to quantify the number of delaminated stone units.

The Confederation Building in St. John’s serves as the home of the Newfoundland and Labrador House of Assembly as well as other provincial offices. Constructed between 1959 and 1960, the building consists of an eleven-story tower with 3 to 5-story wings on three sides of the tower. The building sits upon Confederation Hill and overlooks downtown St. John’s and the harbor. The tower, rectangular in plan, is clad in brick with limestone trim and is topped by a sheet metal roof with a lantern. The limestone is purportedly from St. Marc Quarry in Quebec.