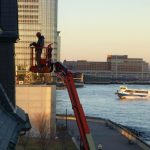 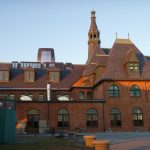 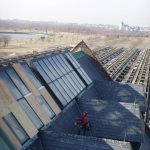 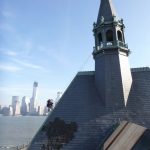 Designed by Peabody & Stearns of Boston, the red brick CRRNJ Terminal structure has Romanesque Revival elements including a steep pitched roof with dormers on the third floor, prominent arched windows, and a tower with a cupola and a clock facing the waterfront. The opening of the new terminal in 1889 occurred at the time of the heaviest immigration to the United States from Europe. It is estimated that from 1890 to 1915 nine to twelve million immigrants were processed for entry at Ellis Island and entered the country via the CRRNJ terminal. It also served as an intermodal terminal connecting ferries to Manhattan, Brooklyn and Staten Island with commuter rail lines into New Jersey.