Former Vertical Access employee Keith Luscinski is now the Technical Institute Manager for Petzl. Recently he competed in his second-ever tree climbing competition. The previous year he landed 6th place and this year he dropped to 14th. “I prepared a lot for it, but there’s no way to compete with people who climb trees everyday and have years of experience.”

Keith is a self-taught tree climber, using the trees initially to practice rock climbing rescue skills. Eventually though, he fell in love with his time working at-height in a natural environment. While studying at Cornell University and a few years following, he taught classes on tree climbing techniques, which included regional classes in the upstate NY area for Cornell researchers. Tree climbing took him from the Sequoias to Costa Rica to Madagascar.

Keith came to Vertical Access in 2006 with a background in industrial engineering and years of experience rock climbing and tree climbing throughout the world.

Keith Luscinski worked for Vertical Access from 2006 to 2017, “climbing” from a Society of Professional Rope Access Technicians (SPRAT) Certified Level I Technician all the way up to a SPRAT Certified Level III Rope Access Supervisor.  During his time at Vertical Access, Keith served as the Society of Professional Rope Access Technicians (SPRAT), chair of the Safety Reporting Committee in 2016 as well as the chair of the Research Grant Committee from 2014 – 2016.

He has combined his knowledge of rigging and engineering to design and test industrial rope access equipment. Through a grant from The National Center for Preservation Technology and Training, Keith tested various types of mechanical anchor systems in sandstone and limestone. He also developed a rolling anchor system that permits efficient hands-on inspections of cable-stayed bridges.

Before joining Vertical Access, Keith worked for Cornell Outdoor Education to pioneer recreational tree climbing instruction. He helped implement institutional standards and safety protocols that are being adopted by similar organizations throughout the country.

We are so grateful to have had Keith on our staff and excited to follow his adventures with Petzl! 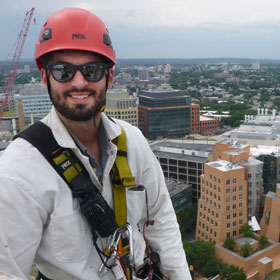 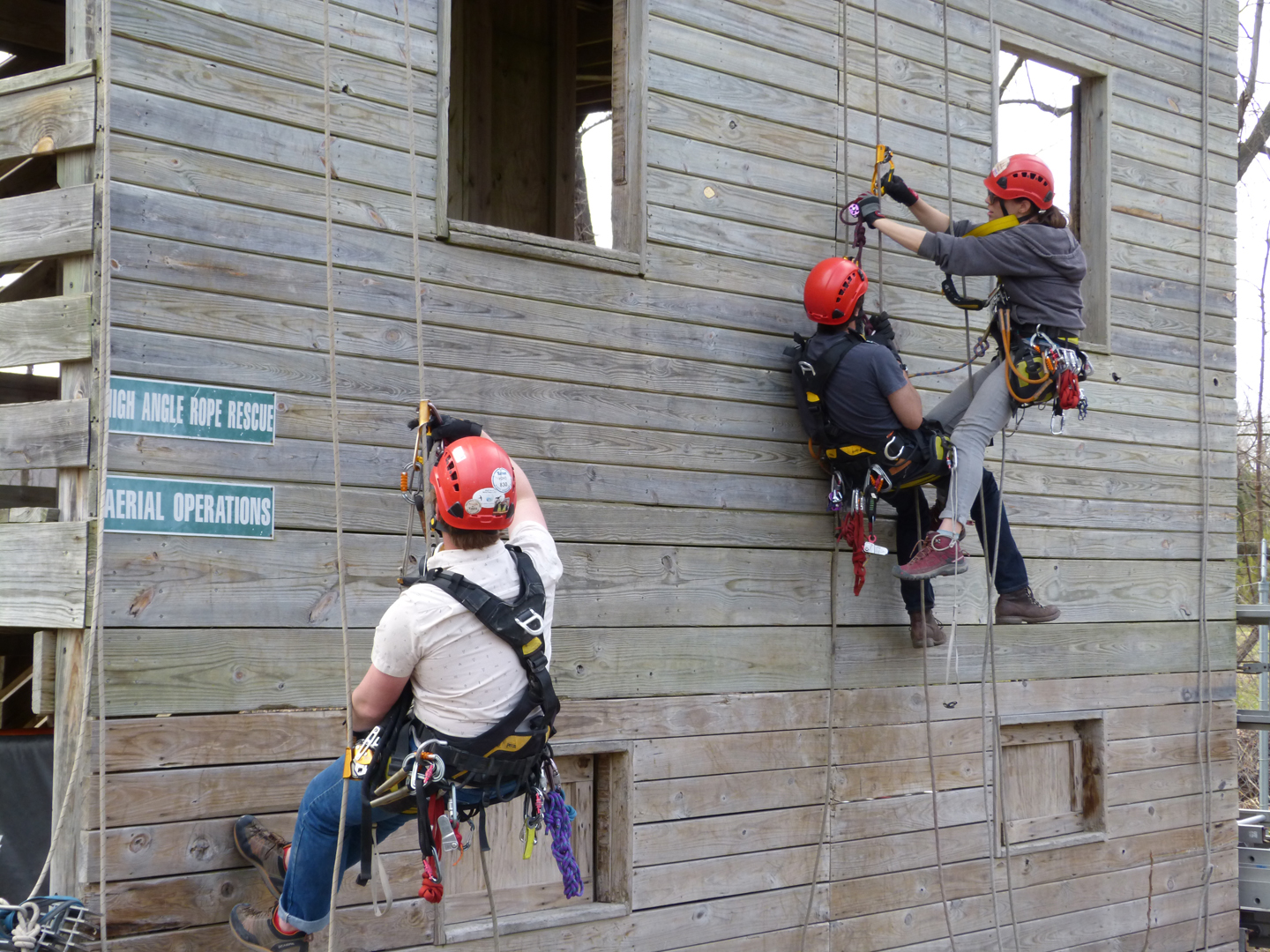 Vertical Access recently conducted an in-house industrial rope access training course in preparation for third-party certification or recertification by the Society of Professional Rope Access Technicians (SPRAT). As a Level III Rope Access Supervisor with over 17 years experience in the construction industry and a Vertical Access employee since 2011, I took on the role of trainer for the first time.

We are excited to congratulate the following staff on SPRAT advancements and recertifications:

I also recertified to a Level III prior to taking on the role as trainer.

Other VA staff SPRAT advancements and recertifications include:

Certified rope access technicians and supervisors must undergo training and recertification every three years. As part of the training, technicians review basic rope access techniques that we most often use during site work as well as more advanced skills
that are less often used, such as passing knots, rope-to-rope transfers, redirects, rebelays and horizontal aid traverse. The training also covers rope rescue techniques and mechanical advantage systems used for hauling or lowering a rescue subject or other load.

Following the training course, Vertical Access brought in an independent SPRAT Evaluator to conduct the evaluation. The evaluation and certification process includes written and oral examinations to test knowledge of safe practices for industrial rope
access and an understanding of the equipment and principles involved in rope access work. The main part of the evaluation is the skills test, in which each candidate must demonstrate a broad range of rope access skills.

SPRAT is a membership organization that promotes the development of safe practices and standards for rope access work in the United States, Canada, Mexico and beyond. Vertical Access is a member of SPRAT and has been active in its leadership committees throughout the years.

For more than 50 years, ASSE’s Professional Development Conference has been and will continue to be the direct reflection of what is taking place in the occupational, safety and health industry.

Vertical Access has been a voting member of the American National Standards Institute (ANSI) / American Society of Safety Engineers (ASSE) Z359 Committee on Fall Protection since 2001.  The mission statement of the committee, in part, is to “produce voluntary national consensus standards to protect workers at height”.

These standards are intended for those involved in general industry fields.  “General Industry”, a term coined by the Occupational Safety and Health Administration (OSHA), includes all industries that are outside of the agriculture, construction or maritime industries.  Being classified as general industry, Vertical Access’s work conducting condition inspections falls under the territory of the ANSI Z359 Fall Protection Code. Learn more about the differences between ANSI and OSHA here.

VA’s primary contribution to the Z359 committee has been to advocate for the inclusion of industrial rope access (IRA) techniques and equipment in this highly respected fall protection code.  For the last three years, Kelly Streeter has been the chairperson responsible for developing the section of the code outlining requirements for descent controllers.  Although a critical component of equipment in the IRA work environment, descent controllers also play a role in other vertical environments including one-time-only rescue situations (from amusement park rides and ski lifts, for example).  Keith Luscinski has been an active member of several committees.

Because industrial rope access techniques and equipment can differ significantly from those employed in conventional fall protection systems, a section of the fall protection code, titled Z359.8, Safety Requirements for Rope Access Systems was created.  Under the chairmanship of Loui McCurley of the Society of Professional Rope Access Technicians (SPRAT) the subcommittee has labored to create a comprehensive IRA section of the code, a difficult task because of the significant departures in training requirements, work techniques and equipment selection from conventional fall protection.

The repeatedly voiced concern from the full ANSI Z359 committee is that the inclusion of rope access equipment with different performance requirements may be confused on site with similarly marked conventional fall protection equipment.  Finally, after more than a decade of work, which saw much resistance to the inclusion of IRA in the ANSI Z359 code and many reversals of direction from the full committee, a resolution has seemingly been reached.

At the recent October committee meeting in Chicago, a group of rope access professionals, including Sam Terry (Sparkling Clean Window Company), Shaun Reed (US Bureau of Reclamation), Keith and Kelly, presented the Z359.8 document in its current form to the full committee and spent an hour discussing and addressing concerns from the full committee.  Near the end of the hour, an idea was suggested that the Z359.8 standard continue to be a part of the Fall Protection Code but bear a number other than Z359.  This would allow the rope access community to continue to draw upon the knowledge base of the full committee, while assuaging concerns that the equipment markings might be confused.  Also, many of the manufacturers on the full committee make both conventional fall protection equipment and rope access equipment, and the new organizational system will keep all the committees under one roof.

A win for all.