Like most of the professional world, the onset of a pandemic induced work stoppage and quarantine presented opportunity where it was once otherwise lost – time for some serious professional development hours and continuing education.  Personally, the accumulated dust on the piano keys, table saw, and Dutch oven was a welcomed indicator that there was now time for all the hobbies and unread books that fell to the wayside before traveling was put on hold.  Professionally, it meant having dedicated time to explore new organizations and attend webinars, conferences and symposia with the click of a button.  With travel time and expenses eliminated, the virtual world attempts to compensate for where it fails in the lack of face-to-face contact, affording me a rise in information exchange and learning.

The Association of State Dam Safety Officials (ASDSO) was one of the organizations I explored, on the recommendation of a co-worker.  My introduction started with a crash course in dam assessment and inspections over three days of immersive ASDSO taught sessions, scheduled to take place just a few blocks from where I live in Nashville, TN.  Like the rest of 2020 scheduled events, the course was ultimately switched to a virtual format.  The course dove head first into more technical aspects than I anticipated and pressed my memory of fluid mechanics and hydrology from college.  I started with a basic working knowledge of dams, but nothing too extensive, and finished feeling confident about making initial dam assessments and inspections. Material covered everything from risk assessment and hazard creep to inspection procedures, down to the Weir and flow rate equations for sizing up spillways and measuring seepage. Case studies were a central feature to illustrate the development of today’s emergency action plans and legal precedents, which still vary by state.  I was surprised to hear that recreation is the most common purpose of dams in the U.S. (as opposed to flood control, water supply, irrigation, hydropower, etc.), considering the controversy surrounding them.

“Drinking from a firehouse” was the term used to describe the course by the instructors, which was a reference to the amount of material covered and speed at which it was taught, especially for those without an engineering or dam-specific technical background.  The scheduled onsite dam inspection that typically occurs during the last day of the in-person course was missed but the instructors did a great job of compensating for it virtually.

I was also able to attend the recent annual ASDSO Dam Safety Conference and serve as a representative at our company-sponsored booth.  This would be the first virtual conference I’ve attended following the March closures.

Networking is one of the many aspects of in-person events that the virtual space fails to replicate.  I may stand corrected when virtual reality becomes as mainstream as the iPhone and FaceTime, but until then it just won’t be the same.  The conference was setup in such a way that encouraged and incentivized striking up dialog with other attendees, visiting booths, and attending sessions, which helped narrow the gap between our world and the Matrix.  Like the course, the general and concurrent sessions were filled with technical demonstrations, modeling, and case studies from various respective dam safety professionals.  Despite the virtual format I was still able to reconnect with colleagues and even make new connections from the safety of my home, thanks to the chat features.

The conference, along with the course, provided a great introduction to the world of dam safety, albeit virtually.  With travel and work schedules almost back to normal it stands as evidence of a silver-lined shut down.

Check out our Spring 2015 Quarterly newsletter. 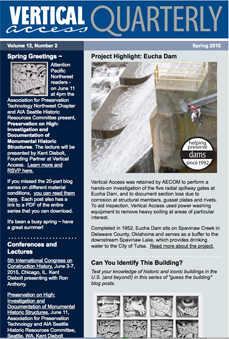 Dam Safety 2013 is one of the leading conferences in the United States dedicated to dam safety engineering and technology transfer.

Kelly Streeter, PE will be representing Vertical Access at Booth #413 and attending sessions.

About ASDSO
The failure of dams and the great destruction and loss of life failures often cause, is a matter of deep concern to the members of the Association of State Dam Safety Officials (ASDSO). ASDSO is a national non-profit organization serving state dam safety programs and the broader dam safety community, which includes federal dam safety professionals, dam owners and operators, engineering consultants, emergency managers, manufacturers, suppliers, academia, contractors, and others interested in improving dam safety.