We’re counting down to the New Year by sharing 15 of our favorite photographs taken on site and during our travels throughout 2015.

Looking down from a pair of steel-arch highway bridges, with a third steel truss bridge in the background 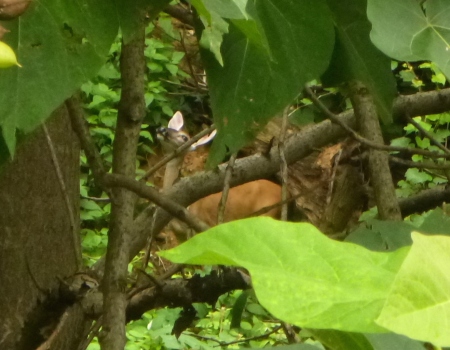 A curious deer watches a VA technician on rope

All posts in this series

Vertical Access winter projects are often trying. The days are short, and the freezing cold weather conditions mean reduced dexterity and poor battery life in our tablets and cameras – all combining to increase the difficulty of a project that might otherwise be pleasant in the spring or autumn. Even compared to most winter weather projects, the Irondequoit Bay Bridge project was extreme.

For four weeks in late February and March, we worked over the solidly-frozen Irondequoit Bay of Lake Ontario. While fishermen below peered through holes in the ice, engineers from DiDonato Associates inspected t he upper areas of the bridge from under-bridge inspection units (UBIU) and we used other methods to move along thousands of feet of steel I-beams at the lower portion of the bridge. Most mornings we were greeted with sub-zero temperatures. One morning we sat in our truck, waiting for the wind chill to climb above -20°F. It never did.

Working on the Irondequoit Bay Bridge was challenging for reasons other than the record-breaking cold weather. At 2,375 feet long, we spent most of our time moving horizontally along the length of the bridge. It’s natural to use ropes as a means to move vertically. Even diagonal movement can be accomplished with efficiency using rope access. But using rope systems to move purely horizontally has its limitations. Second to the cold, our biggest challenge was planning the most efficient access system for each section of the bridge. At various locations on the bridge, we used one of three access and fall protection techniques.

Most of our time on the bridge was spent “beam scooting,”  as evidenced by the holes in the seats of our coveralls. On horizontal I-beams, we could sit comfortably on the top flange of the beam and scoot around as needed. With this access method, we used conventional fall protection methods with a shock absorbing lanyard connected to a beam clamp anchor on the beam’s flange.

To access the underside of the beams, the much more strenuous “beam rolling” technique was employed. Hanging from two or three beam clamp anchors, we would shimmy along the bottom flange of the beam. Beam rolling is tiring, because of its constant, free-hanging nature.

In the arched spans of the bridge, some of the I-beams were too steep to scoot or roll along safely. For these locations, we used the typical rope access “rope-to-rope” maneuver to traverse along the I-beams. Suspended from ropes on overhead beams, we didn’t need to balance on the underfoot beams, but rather tip-toed along them.

With our three access systems well practiced, we were able to speedily move around the bridge trusses. During the few above-freezing site days that we enjoyed, it was clear that the biggest contributor to our efficiency was warm weather. With less bulky clothing and more manual dexterity, we seemed to zip along. We hope to someday return to the Irondequoit Bay Bridge in the summer and enjoy working over an unfrozen bay.

Check out our April 2011 Quarterly

Now that spring has arrived and flowers are starting to bloom in upstate New York, we can look back at one of our interesting winter jobs with some fondness. On the last three days of 2010, Vertical Access technicians Mike Gilbert, Keith Luscinski and Evan Kopelson found themselves working below the Route 9W bridge over the Popolopen Creek, a tributary to the Hudson River near Fort Montgomery, NY.

The bridge is a steel truss bridge supported by concrete piers and abutments, built in 1915 and widened in 1935. VA was retained by WSP Sells to take core samples from three faces of the 1915 portion of the concrete pier at the north end of the bridge. As part of the sampling, VA also performed in situ carbonation testing. Following removal of the samples, VA packed the openings at the sample locations with non-shrink grout.

Working on the bridge in the middle of winter posed several logistical challenges. Two days before work was scheduled to start, a storm left 12 inches of snow in the Fort Montgomery area, one of a string of snow events that passed through the northeast last winter. Although the road deck had been plowed the day before site work started, the sidewalk on the east side of the bridge had not. We had planned on using the sidewalk area for staging, and needed to cart a generator, rigging gear, the coring tools and other equipment 100 yards down the sidewalk to get it into and out of place each day. Heroically, Keith spent the evening before the coring work started shoveling the sidewalk to clear a path to the staging area.

Another challenge was working with a water-fed coring drill in temperatures that fell below freezing each night. Two fifty-five gallon containers were rolled along the bridge sidewalk each day and hoses were lowered from the barrels to the coring drill. To prevent water from freezing in the hoses, nozzles and fittings, this equipment was brought into the hotel room at the end of each day.

Although the weather and site conditions seemed daunting at first, the days became warmer and the coring work progressed over the three days. Finishing up as dusk settled into the Hudson River Valley, we were able to get back to Ithaca before the turn of the new year, and Keith was able to celebrate the last few hours of his birthday at home.

Sunrise over the Hudson River

From March 14 to 18, 2011 Vertical Access technicians Keith Luscinski, Evan Kopelson, Dave Dayan and Donn Hewes were on site at the Arthur Ravenel, Jr. Bridge in Charleston, SC to perform a hands-on inspection of designated areas of the bridge. The Arthur Ravenel, Jr. Bridge, designed by Parsons Brinckerhoff and built by Skanska and Palmetto Bridge Constructors, was completed in 2005 to replace two steel truss bridges spanning the Cooper River. It is the longest cable stayed bridge in North America with a main span length of 1,546 feet. The two diamond-shaped concrete pylons stand 575 feet above the water, supporting a total of 128 stay cables.

To perform the inspection of the bridge’s high density polyethylene (HDPE) cable ducts, damper seals, formwork tubes and expansion sleeves, VA used a two-rope roller system designed by SPRAT Level 3 Supervisor Keith Luscinski. VA’s 2011 inspection was the second round of examinations of designated cables. The first inspection was performed in October 2007 and the next inspection is planned for October 2012. See a video clip of the 2011 inspection here.

The blizzard of 2010 had just passed through the Hudson Valley region of New York State affording a break in the weather to extract 13 core samples of the concrete pier on Popolopen Creek Bridge for testing to determine state of conditions. Keith Luscinski is on the ropes and conducted the procedure.  NY Department of Transportation was also onsite, as were representatives from  project client WSP SELLS.  This deck truss design bridge was built in 1915 and widened in 1935. It is 600 feet long, 48 feet wide, and rises about 150 feet above the mouth of Popolopen Creek.