This July, Keith Luscinski (from the Vertical Access – Salt Lake City office) joined Rob Moore and Dave Katz from Cornell University’s Tree Climbing Institute, on a research trip to assist a team from  the University of California, Berkeley with an ongoing project of tracking and sampling seed cones from the canopies of the giant sequoia trees in California.

Giant sequoias are coniferous trees that can grow to over 300 feet in height and 50 feet in diameter, though their cones are only as large as a chicken egg. In previous years, large quantities of these cones were collected to stock California’s state seed bank and assess seed germination rates.  The current research, however, is a multiyear project that tracks the in-tree cones as they grow and age.  Each year, several cones are harvested from each tracked location. 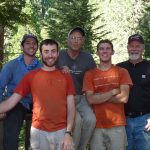 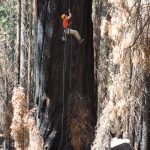 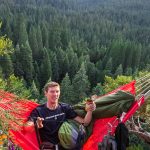 Keith eating a cold can of ravioli for dinner and getting ready for a night 300 feet above the ground. 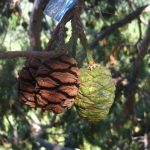 Sequoia cones being tracked for research.

While working on buildings, VA technicians often have the luxury of taking an elevator to the top floor.  In giant sequoias, a “quick” trip to the top of a previously unclimbed tree may take several hours.  More difficult trees can require 2 or 3 days of work before reaching the highest branches.  In these trees, the lowest branch may be 150 feet above the ground, ruling out the possibility of climbing from branch to branch like a kid.

A standard sequoia climber’s arsenal includes an 8-foot tall sling shot and a crossbow.  Mounted with fishing reels, these “line insertion” tools are used to place a strand of fishing line over one of the lower branches in the tree.   This line is used to pull up a small diameter cord, which in turn is used to pull up a 7/16-inch diameter nylon rope.  At the uppermost supporting branch of this rope, a tree climber may be less than halfway to the top of the tree.  Working from here, the climber will throw ropes over successively higher branches until reaching the top.

Before coming to Vertical Access, Keith found his way into the world of rope work through climbing trees.  Keith helped pioneer recreational tree climbing instruction with Cornell Outdoor Education while studying industrial engineering.  In 2006, he found that many of his skills transferred over to industrial rope access, but most of his equipment did not.  Vertical Access uses hardware, harnesses and rope systems that are intended for heavy use in an industrial environment.  On top of that, VA technicians are always supported by two ropes for redundancy purposes, whereas tree climbers rarely have two attachment points.

Read the July 2013 Quarterly Newsletter here. Subscribe to our blog in the sidebar and get email updates as new items are posted throughout the year.

Mechanical anchor systems are commonly installed in historic masonry materials despite the lack of manufacturer-specified design values for this type of substrate. Scaffolding lateral supports, signage installations and telecommunication mounting systems all use these mechanical fasteners in natural stone materials.

The current lack of codes, guidelines or recommendations for tensile and shear design criteria in historic masonry materials leaves structural engineers to improvise the design and specification of these anchors.  ….