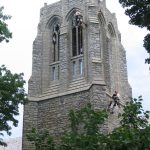 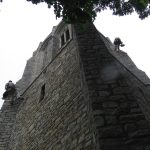 Built in 1921, The Reformed Church of Poughkeepsie was designed in a neo-Gothic style by Charles Collens. At the southeast corner of the church is the bell tower. It rises approximately 70 feet from grade to the top of the parapet wall, with three main interior levels. About half way up the tower is the organ level, which houses an organ that was installed in 2004. The next level is the bell level. The uppermost level is the chime level, which still contains the full chime set within a space exposed to the environment through the open tracery of paired gothic windows on each façade. The exterior of the tower is clad in limestone with cast stone trim. The limestone, which is set in random coursing, is a fine-grained, heterogeneous stone with prominent veining and inclusions. An orange-colored cast stone is used for trim and ornament of the tower. The cast stone is particularly prominent at the upper areas where it is used to form rectangular openings at the bell level and the open tracery of the chime level.