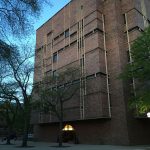 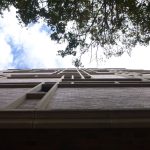 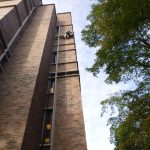 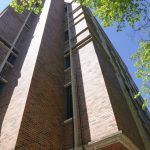 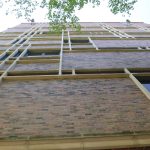 The Fleming Administration Building, designed by Alden B. Dow and completed in 1968, is a 6-story, brick-clad building with limestone trim centrally located on the campus of the University of Michigan in Ann Arbor. The building is named for Robben Fleming, the 9th president of the University of Michigan, and houses administrative offices. It is square in plan, with projecting façades floating above a recessed ground floor with low, round-arched entrances. The façade treatment, with vertical and horizontal bands of limestone and windows of varying sizes arranged in an asymmetrical grid, was reportedly inspired by the paintings of Piet Mondrian.

Alden B. Dow is noted for his contribution to “Michigan Modern” architecture and was named architect laureate of Michigan shortly before his death in 1983. Dow designed six buildings for the University of Michigan, along with several other commercial and civic buildings in Ann Arbor.