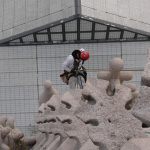 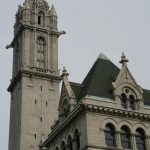 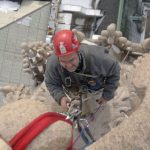 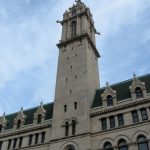 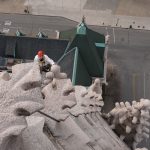 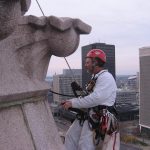 The Erie Community College building was originally designed as the main post office for Buffalo by Supervising Treasury Architect Jeremiah O’Rourke with William Aiken and James Knox Taylor. Constructed between 1894 and 1901, the five-story building covers an entire city block bordered by Ellicott, South Division, Oak and Swan Streets. The building’s use as a post office ceased in 1963, when a new postal facility was constructed at a different location, and in 1981 the building was converted to the main campus of Erie Community College.

The Erie Community College building is constructed of load-bearing masonry. The granite at the tower and other portions of the building are from the Bodwell-Jonesboro quarries in Washington County, Maine. These quarries produce a grayish pink colored granite and also furnished stone used in the construction of the Custom House in Buffalo and the Bourse in Philadelphia.

A 244-foot tall tower rises from the center of the west façade on Ellicott Street. Like the rest of the building, the ornament of the tower reflects the Flemish Gothic style of the original design. At the tower, the ornament is even more exuberant than the lower portion of the building and includes turrets and projecting grotesques at the corners, foliated crockets at each course of the pyramidal tower roof and a massive stone finial capping the structure.