Getting to see exclusive spaces is one of the perks of our work at Vertical Access. Last summer we were asked to join Robert Silman Associates and the New York Landmarks Conservancy to work inside a rarely-seen Lower East Side Landmark: Beth Hamedrash Hagodol, a historic synagogue and home to this country’s oldest Russian Jewish Orthodox congregation. Closed since 2007, the building has weathered storms, fire and global recession, and with a dedicated coalition of groups working for its preservation, we hope that many more people will soon be able to visit its remarkable interior.

From Baptist church to synagogue

The synagogue began its life as the Norfolk Street Baptist church in 1850, designed by an unknown architect in the prevailing Gothic Revival style. The expanding and upwardly-mobile Beth Hamedrash Hagodol congregation, founded in 1852, purchased the building in 1885 and modified it to meet the needs of Orthodox worship.

The congregation was unique in welcoming members from all countries at a time when New York’s Jewish synagogues typically served congregations hailing from the same town or region in Eastern Europe – a reflection of the localized settlement patterns of the city’s immigrant neighborhoods.

Beth Hamedrash Hagodol was designated a New York City Landmark in 1967, and noted in the designation report “especially for the services it has rendered to the many orthodox Jews from eastern European countries who migrated to the United States during the late Nineteenth and early Twentieth centuries.”

By the time it was added to the New York State and National Registers of Historic Places in 1999, however, the synagogue had long been subject to a combination of forces that are all-too-common among houses of worship throughout this country, including an aging, dwindling congregation and decades of deferred maintenance.

Time and disaster take their toll

The late twentieth and early twenty-first centuries have not been kind to the 160-year-old building. A 1997 storm blew out the two-story arched window on the street façade, leaving the building open to the elements for weeks until the New York Landmarks Conservancy stepped in with a grant for temporary repairs. Then, a fire in 2001 severely damaged the roof and plaster ceiling. With only 15 or 20 active worshippers in its congregation, the synagogue was closed in 2007.

In 2012 Beth Hamedrash Hagodol’s rabbi applied for a demolition permit under the economic hardship exception, which – very rarely and in extreme cases – grants financially-strapped owners permission to demolish landmarked buildings. Following outcry from neighbors and historians, the application was withdrawn in spring of last year. 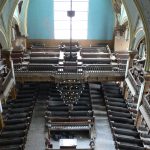 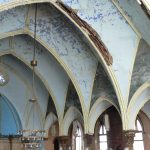 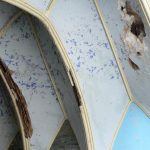 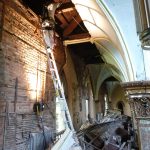 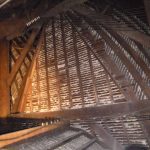 See more photos of our investigation on Bowery Boogie

In a demonstration of the cultural value of Beth Hamedrash Hagodol, groups including the Lower East Side Jewish Conservancy, the New York Landmarks Conservancy, and the Friends of the Lower East Side have been working to raise awareness about the building and to raise funds for its stabilization.  Last summer, the New York Landmarks Conservancy sponsored an engineering study, a first step in planning a sustainable future for the synagogue.

As part of the study, our team inspected and evaluated the synagogue’s roof structure. By using Industrial Rope Access to reach the space between the ceiling and roof, we were able to document the structural system and its condition.

We are happy to report that the engineering study showed the basic structure of the building to be sound, though there is extensive water damage and most of the interior plaster will likely need replacement. Beth Hamedrash Hagodol is an irreplaceable record of New York’s Jewish immigrant history – a landmark of the Lower East Side which we hope will be preserved and revitalized. We’ll keep you updated as the story unfolds.

For more, check out ongoing coverage of the synagogue on Curbed, Bowery Boogie, and the Wall Street Journal, or read the National Register nomination .