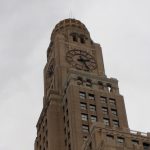 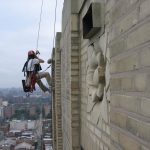 The Williamsburgh Savings Bank Tower was built in downtown Brooklyn, New York between 1927 and 1929. Designed in the Art Deco style, the building remains the tallest building in Brooklyn today with 34 stories and standing 512 feet tall. The exterior of the building includes a clock with faces on the four façades of the tower, which was the largest in the world from 1929 until 1962. It also features a gilded copper dome; carved lions, turtles and birds on the exterior; and a marble banking hall on the ground floor with 63-foot vaulted ceilings, 40-foot windows and elaborate mosaics.

The main purpose for the building of this Brooklyn icon was to house a banking facility, but there were also 33 stories of offices to rent to other businesses. For many years the Williamsburgh Savings Bank building (located at Atlantic and Flatbush Avenues in Brooklyn’s Fort Greene neighborhood) was known as “The Mecca of Dentistry” because so many dentists rented space there. The observation deck on the top floor was open to the general public until the 1990s, making it a popular place to visit for great views of the city.