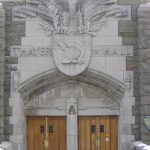 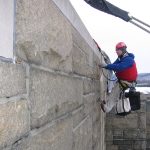 Thayer Hall at the United States Military Academy was originally designed and constructed as the Riding Hall, utilizing the vocabulary of the Gothic Revival style that was incorporated into other buildings at West Point during the same period. The structure originally contained one large free-span space in the main portion of the building, with horse stables and a hay loft located in an adjoining structure at the south end of the west elevation. Between 1955 and 1959, the Riding Hall was converted into an academic building and renamed Thayer Hall. Four floors were inserted into the interior of the structure and the space was divided into classrooms and offices. At that time a parking deck was constructed on top of a new roof structure and alterations were made to the west façade to accommodate the new use of the building. The exterior consists of gneiss masonry in random ashlar coursing, with limestone parapets, window and door surrounds and belt courses. Granite was used in some of the building alterations, especially at the bridges leading to the building on its west side.