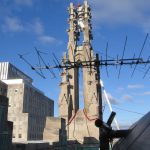 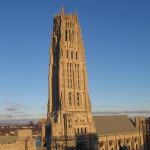 Union Theological Seminary is comprised of a quadrangle of connected structures at the northeast corner of Broadway and West 120th Street. The complex was completed in 1910 and designed by Allen & Collens, who later designed nearby Riverside Church. The Collegiate Gothic style of the two towers of UTS and connecting chapel, library, refectory and dormitories and consistent use of schist with limestone trim at the exterior unify the complex of buildings.

The Brown Tower rises from the southeast corner of the UTS quadrangle, with the south and east facades of the tower climbing 14 floors from street level. The north and west tower facades meet the gable roofs of connecting wings at the fourth floor. The tower is square in plan with four corner buttresses that rise above a crenellated parapet to form spines. There are paired arched windows on each façade of the tower at the upper levels and a single two-story pointed arch window on both the south and east facades.

Like the adjoining buildings of the seminary, the exterior masonry of Brown Tower is schist with limestone trim and ornament. Granite is used at the base of the tower for the watertable. The source of the stones used at the Brown Tower is not known, but the schist is most likely “Manhattan Schist” and the limestone appears to be a homogenous, buff-colored limestone such as Indiana limestone.