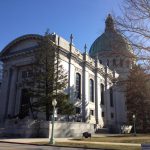 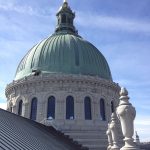 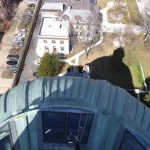 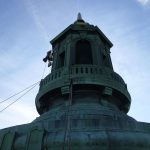 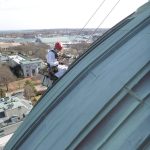 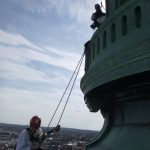 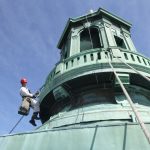 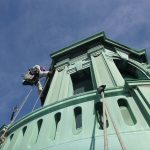 Vertical Access performed a hands-on inspection of the dome of the United States Naval Academy Chapel in Annapolis, Maryland in order to assist the project team with assessing the condition of the sheet copper cladding.

The United States Naval Academy Chapel was designed by Ernest Flagg as part of his 1902 Beaux Arts master plan for the Academy. The Chapel was completed in 1908. It was originally a Greek cross in plan, but in 1938 Paul Philippe Cret designed an extension to the nave on the east side, creating a Latin cross plan. The chapel, including the inner and outer dome, is of reinforced concrete with brick cladding and stone and terra cotta ornament.

The original dome cladding, modeled on the 1708 Royal Chapel of Les Invalides in Paris, was terra cotta; this was replaced with sheet copper in 1929, due to persistent water infiltration. Eight pairs of wide ribs, with a pan between each pair, divide the dome into eight facets, each containing five narrower ribs. An eight-sided lantern rests on brackets atop the dome, and is surmounted by a gilded copper cupola with a gilded sheet metal obelisk finial.