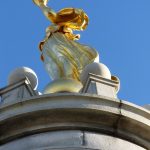 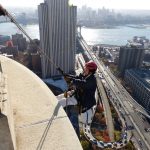 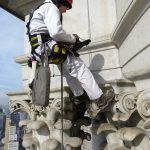 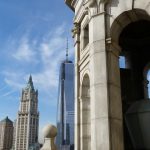 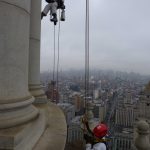 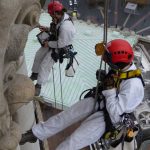 Vertical Access was retained by Urbahn Architects to perform a hands-on investigation of the tower portion of the David N. Dinkins Municipal Building in 2013. The purpose of the work was to document existing conditions as part of a city-mandated Façade Inspection and Safety Program, as well as for development of repair recommendations for the building. The area of investigation included the central tower above the 25th floor and the four turrets that rise from the corners of the tower above the 27th floor. Using videography, VA also documented the condition of the gilded Civic Fame statue that crowns the building.

The David N. Dinkins Municipal Building, constructed between 1907 and 1914, was the first skyscraper produced by the firm of McKim, Mead & White. It is a notable example of Beaux Arts design incorporating Roman and Italian Renaissance decorative elements. Built to house the offices of the city government following the consolidation of the five boroughs in 1898, the granite-clad building consists of a 25-story base on top of which rises a 15-story tower surrounded by four turrets representing the outer boroughs. The tower is surmounted by sculptor Adolph Weinman’s 20-foot-tall gilded Civic Fame statue. Guastavino vaulting is used at the building’s ground floor colonnade and just below the cupola level. Other building materials include terra cotta and cast iron.