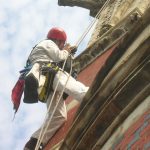 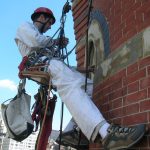 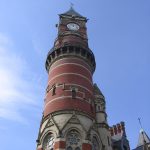 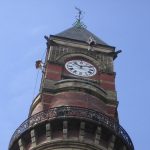 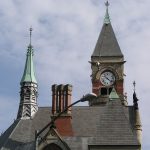 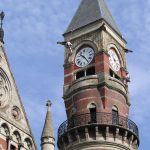 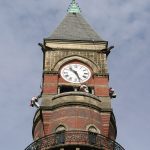 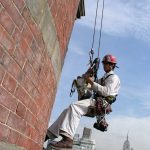 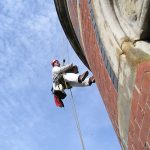 The Jefferson Market Branch of the New York Public Library is the surviving portion of a complex of buildings originally built as the Third Judicial District Courthouse between 1874 and 1877. The asymmetrical building plans and forms, polychromatic materials and numerous gables and pinnacles that are incorporated into the design are typical of the High Victorian Gothic style. Prompted by the efforts of Greenwich Village residents, the building was saved from demolition and rehabilitated for use by the New York Public Library beginning with improvements to the clock tower in 1961 and culminating in the opening of the branch library in 1967.

The 171-foot tall clock tower at the northeast corner of the building originally served as both a fire watch and bell tower. Like the rest of the adjoining structure, it is constructed of load-bearing masonry faced with Philadelphia red brick and sandstone from Berlin, Ohio. The upper portion of the bell tower consists of a stone balcony with iron railing, belfry, clock level and pyramidal roof. Distinctive features of the upper portion of the clock tower include the diamond-pattern effect of black painted brick at the balcony level, corbelled brick corners at the transition from the cylindrical tower to the square belfry, polished granite columns at the belfry, quatrefoil-motif sandstone ornament at the clock level, gargoyles at the corners of the tower below the roof, the slate pyramidal roof and a copper sheet metal cap with wrought iron finial at the peak of the tower roof.