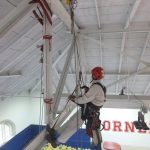 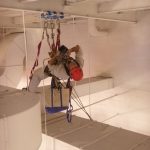 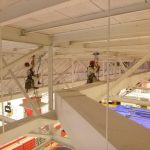 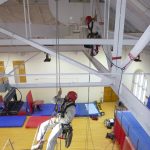 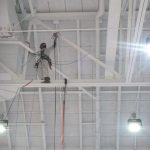 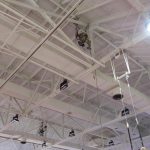 Teagle Hall was constructed in 1951 to house athletic facilities including a pool, fitness rooms, and gymnasium. Designed by Rogers & Butler in a restrained Collegiate Gothic style, the exterior of the building is faced with local gray-brown shale and the roof has multicolored slate, features that are typical of many buildings on campus constructed before 1950.

The gymnasium is situated at the southeast corner of the building on the second floor. The roof framing consists of steel trusses running north-south, with girders running east- west and north-south beams running between the girders.

The ceiling panels, which are 2’-0” wide and approximately 6’-7” long with a thickness of 2-3/4”, sit on the framing with the long dimension spanning between the beams. Secondary beams were reportedly installed in between each pair of primary beams at some point after construction to address cracking and deflection of the ceiling panels that had been observed.