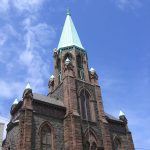 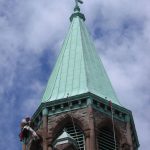 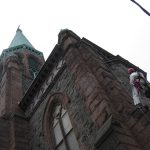 St. Anthony of Padua Church was designed by Louis H. Giele in a Victorian Gothic style and constructed in 1892.

The narthex of the church on the east side of the building consists of three bays, with an octagonal tower and copper-sheathed spire rising above a square tower base at the center bay.

The exterior walls of the church are load-bearing masonry, composed of a granitic stone set in random ashlar coursing at the main walls with Portland (CT) brownstone trim used at the buttresses that delineate the bays of the façade and at the pointed-arched window surrounds.