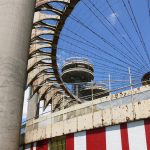 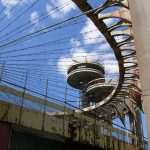 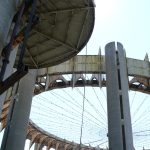 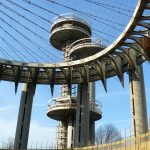 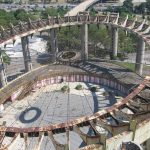 The New York State Pavilion, designed by Philip Johnson and Richard Foster Architects, was commissioned by the World’s Fair Commission for the 1964-65 World’s Fair in New York City (Queens). It is one of a few structures from the Fair that remains standing today. The Pavilion consists of three main components, the largest being the Tent of Tomorrow: an elliptical plaza measuring 350 feet by 250 feet. This space is surrounded by 16 concrete columns, each approximately one hundred feet high) which once held up a colorful canopy covering the plaza. This canopy protected the public and the terrazzo mosaic map of the state of New York that decorates the floor, also designed by Philip Johnson. The Tent of Tomorrow, along with the other structures of the Pavilion, were intended as temporary structures but were never demolished and are now candidates for landmark status.