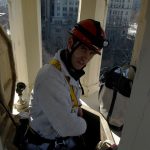 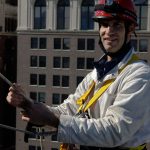 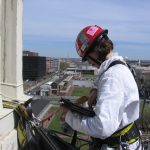 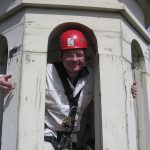 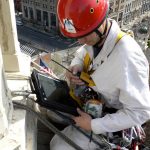 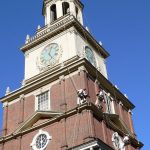 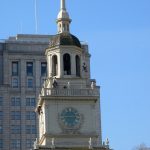 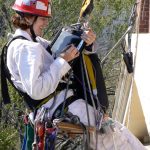 The Independence Hall Tower today stands as a recognizable symbol of both the first steps in the founding of the United States and of early efforts to preserve the cultural heritage of the nation. The Tower consists of a square masonry base, engaged on its north façade with the main block of Independence Hall, on top of which rises a wooden steeple. The steeple, designed and constructed in 1828 to recall the original wooden tower steeple, consists of a square clock level and cupola base, an octagonal cupola which serves as the Tower belfry, a smaller octagonal lantern and shingled spire section, and finally the wrought iron and sheet metal weathervane assembly at the top of the Tower. Although the Baroque/Gibbsian and Georgian architectural elements of Independence Hall and the adjoining Tower reflect mainstream English design fashions of its time, the historical events associated with the structure are more closely connected to the revolutionary beginnings of the United States. As such a powerful symbol of American historical and political events, Independence Hall and its Tower have been the focus of numerous preservation plans, including one of the first large-scale restoration projects undertaken in the rebuilding of the steeple and numerous subsequent repair and stabilization campaigns. The documentation and assessment of the Tower performed by Vertical Access was undertaken as part of a historic structure report developed in preparation for the continued preservation of the Tower’s structural, material and mechanical systems.