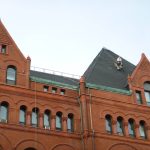 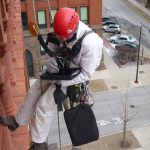 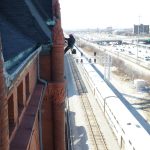 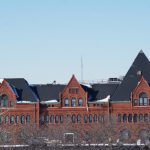 The Main Building was designed by the Chicago architecture firm of Patton & Fisher in 1891 and constructed between 1891 and 1893 for the newly formed Armour Institute of Technology. In 1940, the Illinois Institute of Technology was created when the Armour Institute merged with the Lewis Institute, another Chicago college. As the school expanded, the role of the Main Building changed. The building, situated at the western edge of the IIT campus between Mies van der Rohe’s one to three-story modernist structures and raised railroad tracks of the Metra commuter rail, now housed administrative offices.

Although distinct from and somewhat marginalized by the modernist buildings adjacent to it, the Main Building possesses historical and architectural significance as one of the only two surviving structures from the Armour Institute and as a notable example of Romanesque Revival design.

The Main Building is rectangular in plan and symmetrical in overall form, with the longer façades facing east and west and the shorter façades on the north and south sides. The five-story structure is built of masonry, with rough-finished dark red sandstone at the basement and first floor and smooth red brick and terra cotta at the upper floors. Characteristic features of the exterior include the use of dark-colored masonry materials with contrasting surface textures, regular arrangement of rectangular and round-arched window openings and steep roof lines with large gable-fronted dormers. A two-story annex structure constructed of similar sandstone and red brick adjoins the south side of the Main Building.