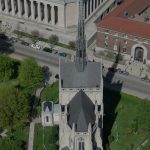 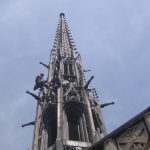 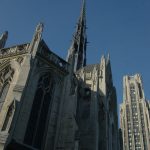 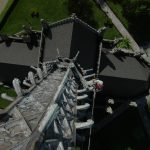 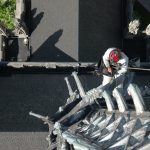 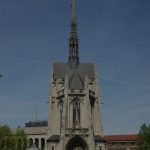 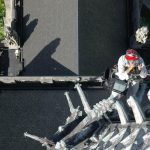 Heinz Memorial Chapel was constructed between 1933 and 1938 as a posthumous gift from Henry John Heinz to the University of Pittsburgh in memory of his mother, Anna Margaretta Heinz.

The Chapel was designed by the Philadelphia architect Charles Klauder in a neo-Gothic style that emulates the 13th century high Gothic Sainte-Chapelle in Paris, France. Klauder, as part of the firm Day and Klauder from 1913 to 1927 and later under his own name, designed numerous collegiate buildings almost exclusively in the neo-Gothic style. Along with the Cathedral of Learning and Stephen Foster Memorial, also designed by Klauder, Heinz Memorial Chapel, is a centerpiece and landmark of the University of Pittsburgh campus.

Architecturally, the Heinz Chapel fleche has eight facets and consists of a base surmounted by a spire. The base of the fleche has several distinct vertical components. There are openings at each facet on two levels, projecting grotesques encircling the fleche at the ribs and decorative finials, tracery and stamped panels. Setback slightly from the base, is the crocketted spire with solid panels consisting of a quartrafoil pattern inscribed within a diamond.