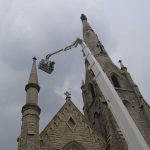 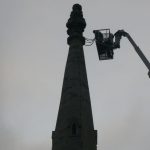 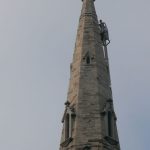 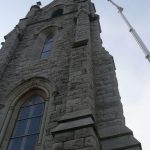 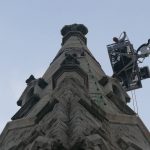 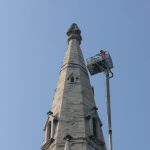 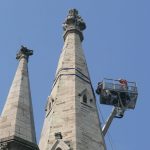 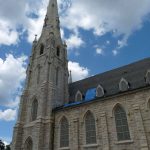 The City Temple of Baltimore, originally the Eutaw Place Baptist Church, was designed in a neo-Gothic style by Thomas U. Walter. Walter was also the architect of the main dome of the United States Capitol and the House and Senate wings of the Capitol in Washington, DC. He also designed Founder’s Hall at Girard College and was an assistant architect on City Hall in Philadelphia. Built between 1868 and 1871, City Temple of Baltimore is Walter’s only commission in Baltimore.

The church is located at the southeast corner of Eutaw and Dolphin Streets, with its prominent tower situated at the northwest corner of the building. The tower is square in plan at its base before it transitions to an eight-facet steeple. It rises approximately 180 feet from grade to the top of the decorative finial. The finial is roughly 13 feet tall from its base molding to the highest point.

The exterior of the church, including the tower, is clad in marble from Maryland. The source of the marble is not known, but it is likely from Cockeysville, MD, which is just north of Baltimore and was a common source of building stone for monumental structures in Baltimore and Washington DC during the period of the church’s construction. Cockeysville marble is fine-grained and mainly white, although it can become gray as it weathers due to impurities and inclusions in the stone.