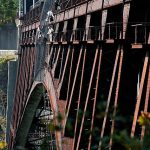 The CPR Bridge is a steel truss arch bridge supporting a steel plate deck. It is composed of a series of vertical, diagonal and horizontal members connected together at riveted panel points. Several types of cast elements are used in the construction of the bridge, including bearing shoes between the top chord and the plate girder at the main span and the anchorage connections at the four anchor points. The connections at the cast elements are bolted.