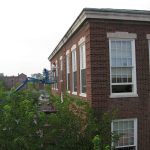 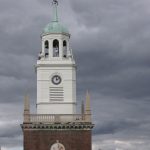 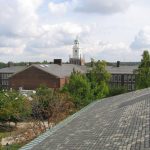 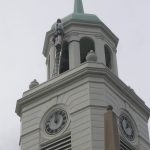 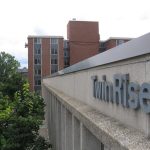 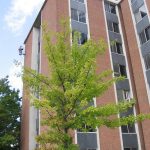 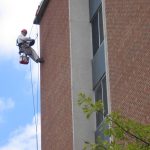 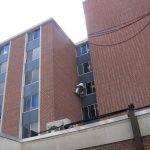 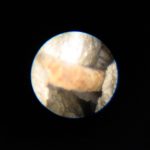 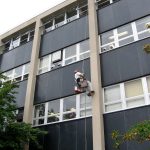 The original quadrangle of the current Buffalo State College campus is formed by Rockwell, Ketchum and Bacon Halls and the Theater Arts Building. These four buildings were designed in 1928 as the first buildings of the new campus. All four buildings have load-bearing masonry exterior walls with steel trussees and reinforced concrete floor slabs. The exterior façades of the four buildings are constructed of brick in Flemish bond coursing, with limestone trim used at the windows, cornice and entry surrounds. Rockwell Hall is distinguished by a 145-foot tower that rises above the portico entryway on the east façade. The tower has a square base constructed of brick, which steps in at the balcony level. Above the balcony, the tower is clad in painted copper sheet metal, including the octogonal lantern at the top of the tower that is capped with a finial and weathervane.

Upton, Twin Rise and South Wing are newer additions to campus, built to the northwest of the original quadrangle. Upton is comprised of three wings. The five-story west wing has brick end walls on the east and west façades and a curtain wall consisting of aluminum windows, granite spandrel panels and limestone cladding at the columns on the north and south façades. The exterior façades of the other wings are clad primarily in brick, with horizontal bands of windows at each floor and corrugated sheet metal running between the second floor windows and the edge of the roof. Like Upton Hall, Twin Rise and South Wing have a concrete structural frame. The exterior façades are comprised of brick masonry with pre-case concrete window jamb panels and cornice units. Slate panels are used at the end walls of Twin Rise and the spandrels of South Wing.