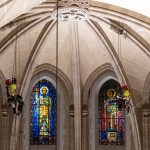 Since 2004 Vertical Access has conducted numerous conditions assessments and hands-on investigations of the exterior and interior of The Cathedral Church of St. John the Divine, working primarily with the design team led by Silman. This ongoing relationship has presented the Cathedral with much-needed information to pursue capital projects and maintain a safe structure as well as provide continuity from trusted partners who understand the condition of the Cathedral facility.

The Cathedral was originally designed by George Lewis Heins and Christopher Grant LaFarge in 1888. Construction of the apse began in 1892 and the large central dome constructed by The Guastavino Company was completed in 1909, the largest dome ever constructed by the firm. After Heins died, Ralph Adams Cram was hired in 1911 to replace LaFarge as the architect of the Cathedral. granite, the newer portion of the south tower is faced in limestone.