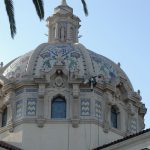 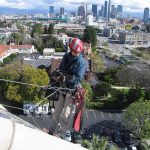 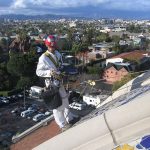 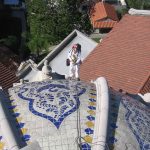 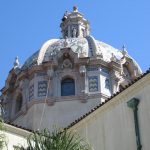 Saint Vincent de Paul Church in Los Angeles was designed by Albert C. Martin between 1922 and 1923 and built between 1923 and 1925. Modeled after the mid-18th century Santa Prisca Church in Taxco, Mexico, the façade, bell tower and dome of St. Vincent de Paul display the Baroque style of Spanish colonial architecture known as Churrigueresque. The plan of the church is a Latin cross, oriented at a 45-degree angle to the surrounding grid of the city streets, with a central dome at the crossing. The exterior walls and dome are constructed of reinforced concrete. The dome, whose thickness purportedly measures between four inches at the base to five inches at the top, is 45 feet in diameter and rises 130 feet in the air.

The exterior of the dome is clad in handmade, glazed ceramic tile, with eight facets defined by limestone ribs that run vertically from the top of the dome to the base. Each facet of the dome has a similar design, which incorporates a central blue and white swan surrounded by leafy branches, brightly colored sunflowers at the base of the dome and a perimeter of blue and yellow flowers adjacent to the stone ribs. An eight-sided lantern constructed of limestone sits atop the dome. At the facets of the lantern, there are a total of four angel statues set in arched niches alternating with perforated screens in front of louvered vents. The upper part of the drum, directly below the base of the dome, is clad in limestone. Each of the eight facets of the drum has a stained glass window at the center, surrounded by projecting brackets and a pedimented hood topped by urns. The lower part of the drum, which meets the gabled tile roofs of the nave, sanctuary and transepts, has a painted stucco finish.