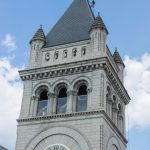 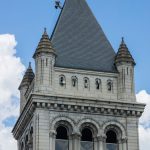 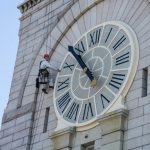 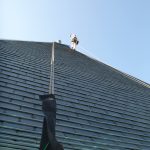 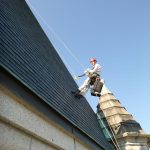 The Old Post Office in Washington, DC was designed by Willoughby J. Edbrooke, the Supervising Architect of the Treasury Department, to house the headquarters of the United States Post Office Department. It was constructed between 1892 and 1899, during which time five subsequent supervising architects made alterations to the design. It is considered the last significant building of the Romanesque Revival style constructed in Washington D.C., and was also the first building in the city to incorporate a steel frame to support the interior structures of the building. The exterior granite, tapering from 5′ thick near the foundation to approximately 1′ thick at the eave of the mansard roof, is load-bearing granite from Vinalhaven, ME.