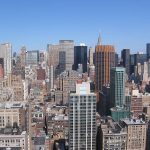 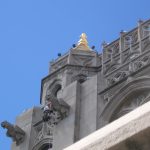 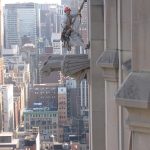 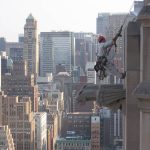 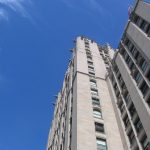 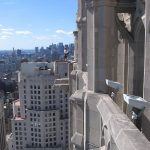 The New York Life Building, situated at the northeast corner of Madison Square, was originally built as and remains the headquarters of the New York Life Insurance Company. The building was designed by Cass Gilbert in 1926 and completed in 1928. The New York Life Building was completed near the end of Cass Gilbert’s career. It is the third and final neo-Gothic skyscraper that he designed in New York City, following 90 West Street (1907) and the Woolworth Building (1913). The commission allowed him to realize his desire of creating a skyscraper clad in stone, four years before his final design, the Thurgood Marshall United States Courthouse, also in New York.

The design of the New York Life Building incorporates neo-Gothic elements such as grotesques and blind tracery with the massing and scale of Art Deco structures of the period. Rising 36 stories and crowned with a six-story gilded pyramidal roof, the siting, scale and style of the building make it a prominent landmark on the New York City skyline. The exterior of the New York Life Building is clad in Indiana limestone. This includes both the ashlar units at the piers and the decorative units at the parapets, spandrels and door surrounds.