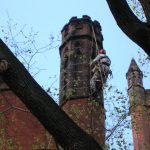 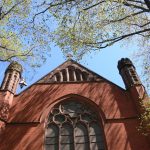 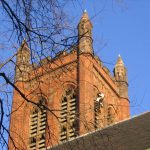 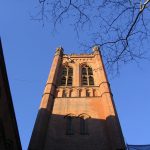 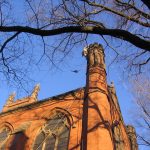 The Chapel of the Good Shepherd on the grounds of the General Theological Seminary with its 130-foot tall bell tower was designed and built in the Gothic Revival style between 1886 and 1888.

The Chapel and adjoining tower, modeled on the tower at Magdalen College at Oxford University were designed by Charles Coolidge Haight.

They are constructed of load-bearing brick masonry with brownstone used for trim and ornament including the tracery at the arched openings, blind arcade hood moldings and belt courses.

A distinguishing feature of both the Chapel and tower are the octagonal turrets at the corners of each of the structures. At the Chapel, the brick turrets are topped by blind crenellations constructed of brownstone. At the tower, the brownstone turrets consist of ashlar units at the level of the crenellated parapet, with a series of blind lancets encircling each turret topped by a short spire.