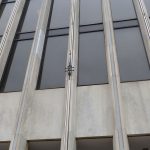 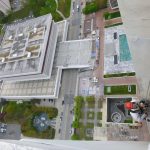 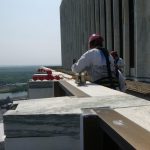 Vertical Access was retained by Rosenwasser/ Grossman Consulting Engineers (RGCE) to investigate the vertical Building Maintenance Unit (BMU) tracks at the columns on the exterior façades to assess whether there are any potential points of blockage.

Corning Tower, officially the Mayor Erastus Corning 2nd Tower, is a state office building at the southeast corner of Empire State Plaza in Albany, NY. Designed by Harrison & Abramovitz as part of the complex of buildings that make up the center of New York State government, the Corning Tower was known as “Tower Building” from its completion in 1966 until its renaming in 1983. The 44-story building has glass windows and spandrels, with projecting columns clad in Vermont marble. Vertical steel “C”-shaped tracks that are part of the original BMU are attached to the outer face of every other column.