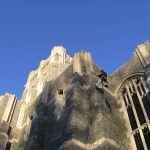 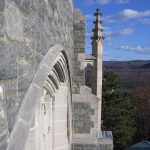 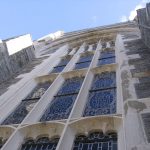 The Cadet Chapel with the attached rectory at the United States Military Academy were designed by the architectural firm of Cram, Goodhue & Ferguson in 1906 in the Gothic Revival style for which the company had become well-known. Situated on a hillside near the high point of the campus, the chapel overlooks the academic, administrative and barracks buildings of the academy and the Hudson River below and to the east. The chapel, oriented with the main entrance on the north side of the building, has a traditional cruciform plan with a long nave and side aisles leading to the chancel and sanctuary at the south end of the building. The 165-foot tall bell tower rises above the crossing of the transept and nave. The rectory adjoins the chapel at the southeast corner of the sanctuary. The walls of the Cadet Chapel are constructed of load-bearing gneiss masonry, quarried from a nearby site on the West Point campus, with limestone used for window surrounds and tracery, belt courses and other ornament. Guastavino vaults are used at the interior groin vaults and porch ceiling.