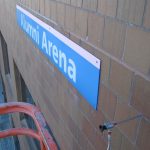 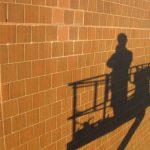 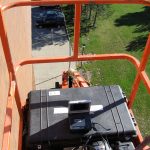 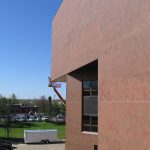 Alumni Arena at University at Buffalo’s North Campus, also called the Health, Physical Education & Recreation Building, was designed and constructed in two phases. The main field house on the south side of the structure was constructed as part of Phase I in 1982.

This portion of the building was designed in 1978 by a project team including architect Robert Traynham Coles and structural engineer Sargent Webster Crenshaw & Folley.

Phase II was designed by Robert Traynham Coles with consulting engineer Ammann & Whitney in 1982 and constructed in 1985. The Phase II project comprises the north half of the building and includes pool facilities, ball courts, locker rooms and other physical education spaces.

Overall, Alumni Arena is over 500 feet long in the north/south direction and 426 feet wide in the east/west direction, with the highest exterior walls reaching nearly 80 feet at the field house.

As part of the investigation, VA used a wall tie locator to map out the location of wall ties at representative areas. VA documented existing conditions using TPAS®. The annotated drawings produced with TPAS helped to identify fault patterns. Quantities collected during the survey with TPAS were used to produce repair budget costs.

After analysis of the initial survey data, VA performed additional investigative work using borescopes. The purpose of the borescope investigation was to confirm the presence of wall ties and connections between relieving angles to the back-up masonry at representative areas.