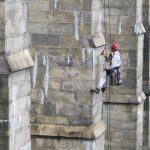 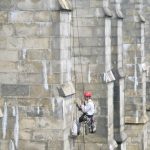 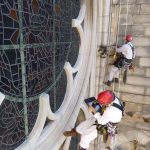 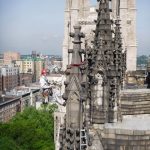 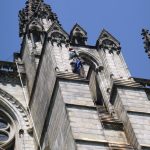 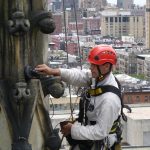 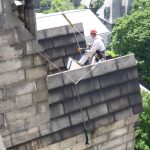 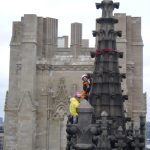 The Cathedral was originally designed by George Lewis Heins and Christopher Grant LaFarge in 1888. Construction of the apse began in 1892 and the large central dome constructed by The Guastavino Company was completed in 1909, the largest dome ever constructed by the firm.

After Heins died, Ralph Adams Cram was hired in 1911 to replace LaFarge as the architect of the Cathedral. Construction of the nave, which Cram designed in a Gothic revival style, began in 1916 with the first finish stone on the south façade laid in 1925. Cram also designed the west façade of the Cathedral with its flanking towers and the gothic ornamentation for the original apse. The exterior cladding of the nave and towers is granite, with limestone used for the tracery of the stained glass windows at the nave and clerestory and for trim and figurative carvings at the west facade.

The Cathedral was opened end-to-end for the first time on November 30, 1941, just before World War II caused a cessation in construction activities. Construction resumed in the 1970s, and in the 1980s about fifty feet of height was added to the south tower. Unlike the rest of the Cathedral exterior, which is primarily clad in granite, the newer portion of the south tower is faced in limestone.