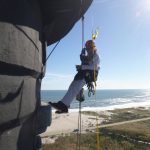 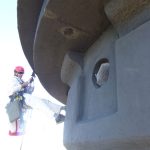 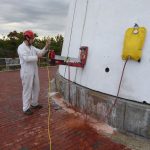 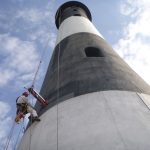 Vertical Access was retained by John G. Waite Associates, Architects to investigate and document the existing conditions at the exterior of the Fire Island Lighthouse in Bay Shore, NY. VA performed a hands-on inspection of the exterior concrete finish, provided live-feed video documentation, and assisted with the nondestructive evaluation of the lighthouse.

The current Fire Island Lighthouse was built in 1858 to replace an 1826 lighthouse on the same site. At 168 feet in height, it was twice as tall as the previous structure, and its Fresnel light was visible for at least 21 miles. The lighthouse is circular in plan, with load-bearing brick walls tapering from about 11 feet thick at the base to about 2 1/2 feet at the top. The lighthouse was decommissioned in 1974, and management of the structure was transferred from the U.S. Coast Guard to the National Park Service in 1979 when it became part of Fire Island National Seashore. A major restoration in 1985 removed and replaced the exterior concrete coating over the structural brick. The lighthouse is operated by the Fire Island Lighthouse Preservation Society.