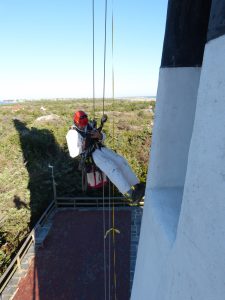 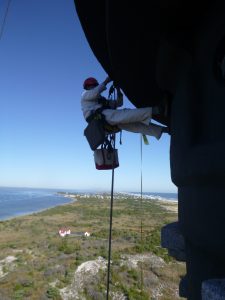 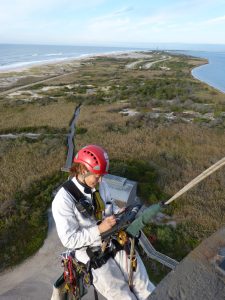 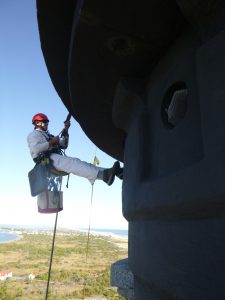 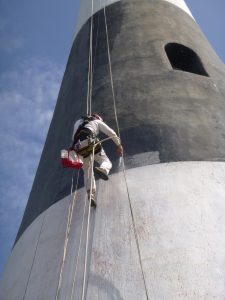 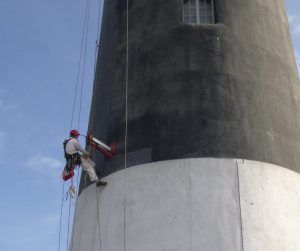 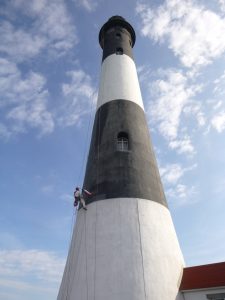 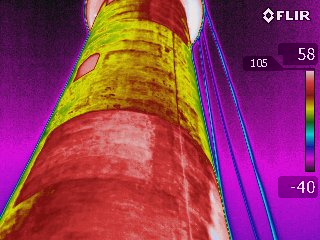 Read the August 2012 Quarterly Newsletter here. Subscribe to our blog in the sidebar  to get email updates as new items are posted throughout the year.

Now that spring has arrived and flowers are starting to bloom in upstate New York, we can look back at one of our interesting winter jobs with some fondness. On the last three days of 2010, Vertical Access technicians Mike Gilbert, Keith Luscinski and Evan Kopelson found themselves working below the Route 9W bridge over the Popolopen Creek, a tributary to the Hudson River near Fort Montgomery, NY.

The bridge is a steel truss bridge supported by concrete piers and abutments, built in 1915 and widened in 1935. VA was retained by WSP Sells to take core samples from three faces of the 1915 portion of the concrete pier at the north end of the bridge. As part of the sampling, VA also performed in situ carbonation testing. Following removal of the samples, VA packed the openings at the sample locations with non-shrink grout.

Working on the bridge in the middle of winter posed several logistical challenges. Two days before work was scheduled to start, a storm left 12 inches of snow in the Fort Montgomery area, one of a string of snow events that passed through the northeast last winter. Although the road deck had been plowed the day before site work started, the sidewalk on the east side of the bridge had not. We had planned on using the sidewalk area for staging, and needed to cart a generator, rigging gear, the coring tools and other equipment 100 yards down the sidewalk to get it into and out of place each day. Heroically, Keith spent the evening before the coring work started shoveling the sidewalk to clear a path to the staging area.

Another challenge was working with a water-fed coring drill in temperatures that fell below freezing each night. Two fifty-five gallon containers were rolled along the bridge sidewalk each day and hoses were lowered from the barrels to the coring drill. To prevent water from freezing in the hoses, nozzles and fittings, this equipment was brought into the hotel room at the end of each day.

Although the weather and site conditions seemed daunting at first, the days became warmer and the coring work progressed over the three days. Finishing up as dusk settled into the Hudson River Valley, we were able to get back to Ithaca before the turn of the new year, and Keith was able to celebrate the last few hours of his birthday at home.

Sunrise over the Hudson River