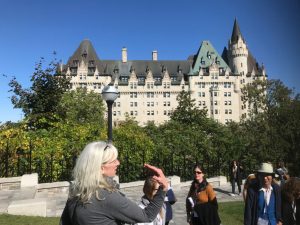 Last October, the Association for Preservation Technology International (APT) and the National Trust for Canada held CAPITALizing on HERITAGE: COMMUNITY, GOVERNMENT and SAVOIR-FAIRE in Ottawa. The joint conference showcased 190 speakers and over 40 exhibitors. With roughly 1,100 attendees and more than 20 countries represented, the four-day event became the largest heritage conference ever held in Canada. CAPITALizing on HERITAGE was my first APT Annual Conference and fueled by a shameful amount of readily available coffee I made my way around paper sessions, banquets, and plenary discussions. Compared to regional APT symposia, the programming was diverse and immense with focuses ranging from the archeological unearthing and documentation of Nova Scotia’s built heritage to an exploration of Ontario’s northern wilderness in search of the rugged landscapes immortalized in paintings by the Group of Seven.

Seven paper tracks covered topics as diverse as cultural landscapes, non-destructive testing, heritage advocacy, the economics of preservation, engineering, and sustainability. Program book in hand, I raced around the conference level to catch specific presentations, curating a personal agenda that offered talks on architectural diagnostics and documentation as well as those that were distinctly Canadian like heritage values and the rights of Canada’s First Nations people. Thanks in large part to programming arranged by the National Trust for Canada, the duality of Ottawa’s existence as both a modern capital city and the unseeded ancestral territory of the Algonquin Anishinabe was never lost on those who attended the conference. This constant reminder sparked conversations that are simply not being discussed in the United States. 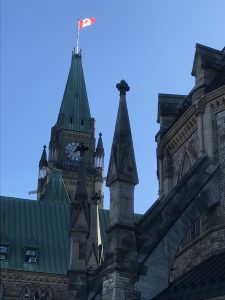 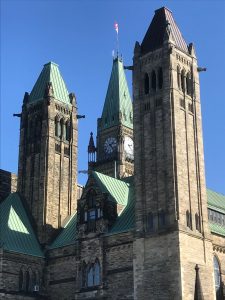 For every learning opportunity CAPITALizing on HERITAGE offered there was an occasion to network and reconnect. It became apparent that the social aspect of the event alone was worth the registration. In Ottawa, I attended the first meeting of the Technical Committee for Materials, talked shop with a former employer, shared a bottle of wine with new contacts, and was introduced to several leading authorities in preservation. I was happy to catch up with familiar faces from previous APT symposia as well. For someone who is relatively new to the field and APT, the Annual Conference offered an unparalleled opportunity to network.

Between the paper sessions, banquets and cocktail hours, CAPITALizing on HERITAGE was nearly overwhelming. Fortunately breaks in programming provided time to get out and explore downtown Ottawa. Whether it was views of Parliament Hill perched high above the confluence of three rivers or beaver tails in ByWard Market (fried dough smothered in butter and maple syrup did not disappoint), Ottawa delivered. The city proved to be an ideal venue for a joint conference with an emphasis on the built environment and interpretations of its cultural significance. With my first Annual Conference behind me I am looking forward to celebrating APT’S 50th Anniversary at Points of Departure next year in Buffalo. (I’m on the planning committee and so far it looks like it’s going to be awesome!)