The rise of the development of drones and their game-changing potential to advance applications for commercial use in the building industry is huge.  We’ve been working to stay abreast of opportunities and advances since first recognizing the value these new tools bring to our work.

Vertical Access holds a Federal Aviation Administration (FAA) 333 Exemption for the commercial use of unmanned aerial vehicles (UAVs) to assist with the inspection of buildings, monuments, dams, bridges, and other types of structures in the United States. However, FAA regulations and restrictions are keeping drone operators pretty much grounded.  While there are opportunities opening up for the use of drones for inspections in the energy sector and for bridge and dam inspections for example – uses for building inspections in urban environments it is not an option – yet.

While regulations are slow to change, technology and software developments are not hindered at all and we’ve been continuing to invest in the time, hardware, and software to be ready and prepared for future project possibilities.

During the last six months, Vertical Access partners and staff have been presenting to a variety of audiences in California, Michigan and Pennsylvania about the potential for the use of drones for inspections. These presentations to industry organizations have provided updates on the state of the ever-evolving FAA regulations and technical applications.

Drones or UAVs: Life on a Frontier

Last Fall, Kent Diebolt co-presented with John Sier, Principal of the law firm Kitch Drutchas Wagner Valitutti & Sherbrook about the use of drones in the building industry. The symposium held in Novi, MI, was organized by the Michigan Chapter of the Construction Owners Association of America (COAA). COAA members include public and private owners and developers from government, academia, and commercial venues who use construction services. The presentation was designed to untangle and de-mystify the many questions about drones from a supply, application and legal / regulatory point of view.

Kent provided an overview of the exponential rise in the potential use of drones in the building and construction industry, including some of the latest stories in the news about the problems they are causing, such as hampering the efforts of fire fighters. FAA regulations and restrictions were presented along with a robust scenario of the myriad opportunities for advancing inspection technologies that are being rapidly developed.

Drones – the Next Big Thing (Maybe) 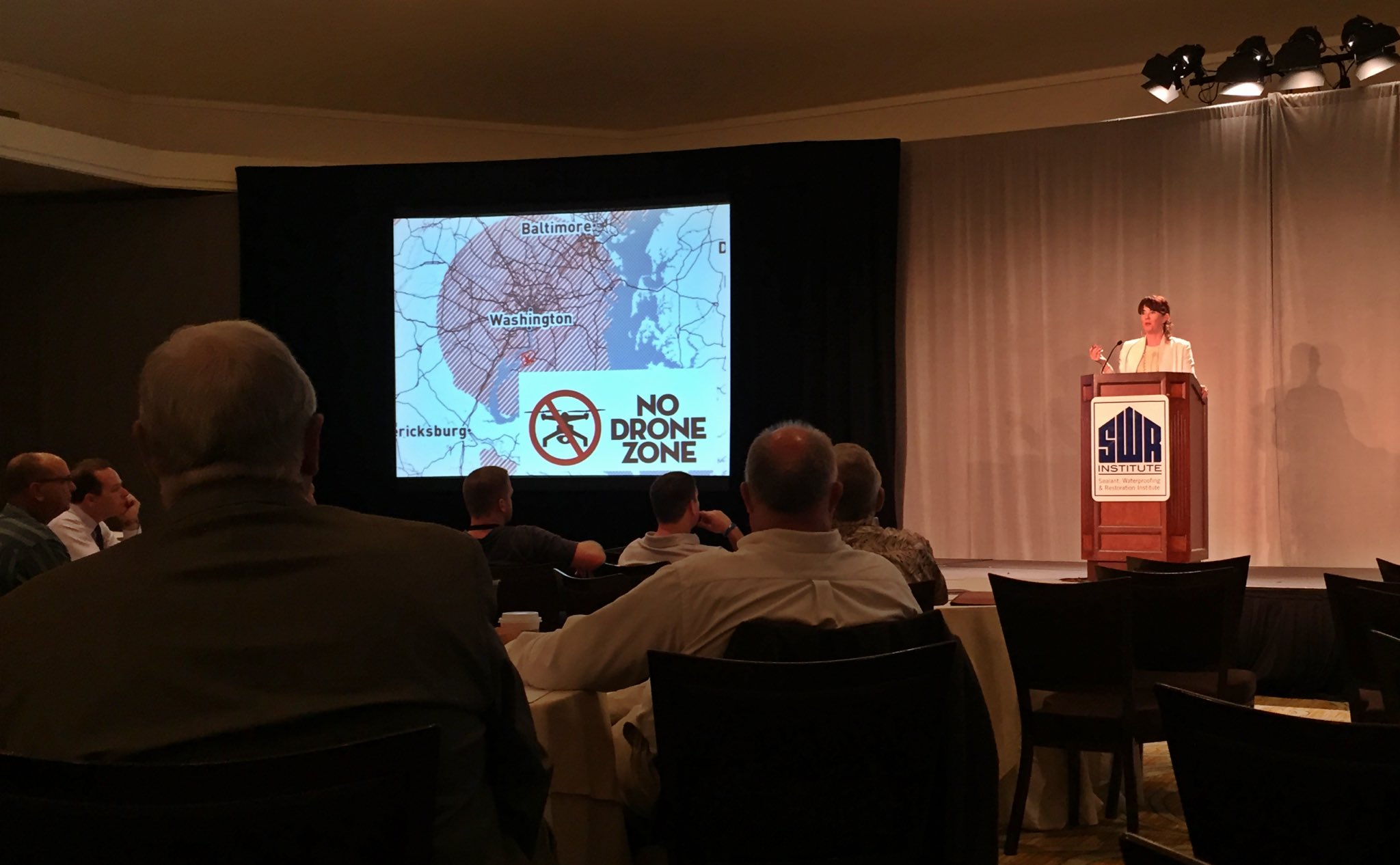 At the 2016 Winter Technical Meeting of the Sealant, Waterproofing and Restoration Institute (SWRI) in San Diego, CA, Kelly Streeter delivered a 40-minute presentation about drones to an audience of commercial contractors, manufacturers, and building design professionals.

Kelly talked about the increasing popularity of the use of UAVs as a new tool that can be utilized, for example, to increase the sample size of building façade inspections. She explained how still photography, live feed video streams, and infrared thermography could be completed using UAVs, and how improved photogrammetry tools can be integrated to create three-dimensional models of existing conditions and infrared profiles.  A sobering look at the latest state of FAA regulations and they way they’re halting use of UAVs in urban environments was also explained.

Members of SWRI can login and see a video of Kelly’s presentation here.

Q: Was there a high level of interest in this subject at the conference?
Kelly: I always judge the interest level of any presentation I am a part of by the range and number of questions after I stop talking.  If I use that measure, I think there was a lot of interest in the topic of UAVs.  The level of knowledge about both the opportunities for UAV technology in architecture, engineering, and construction was largely limited to visual inspection so the photogrammetry, I think, was new to most.  The review of the regulatory environment was a surprise to most.

Q:  What were some of the questions and concerns of the audience? Anything surprise you about their responses?
Kelly: There were definitely people out in the audience who are using drones in their work without adhering to the current FAA regulations.  In that sense, I was the bearer of bad news.  Specifically, I had to underscore that the “drone registry” is for hobby users only and is not the proper path for users who are using the technology for commercial purposes.

Q: What application for drones in your business are you most excited about ?
Kelly: I think the creation of 3D photogrammetric models is incredibly compelling and could be very useful for developers working with historic structures.  I also constantly think of project examples where a drone could help us rig certain structures more safely.  Again, both of these applications are not viable until the FAA loosens up.

Q: The FAA recently announced it is developing drone regulations to allow some unmanned aerial vehicles to fly over people for commercial purposes. Could this be the beginning of broader approvals coming down the road?   Read article
Kelly: I certainly hope so.  The fact that our applications have both commercial need and public benefit should matter.  Yes, our services would make money, but our applications could also increase the safety of our employees and of the public.  It seems to me that April 1 may be a bit optimistic but we will see.

Drones: The Good, the Bad, and the Unknown 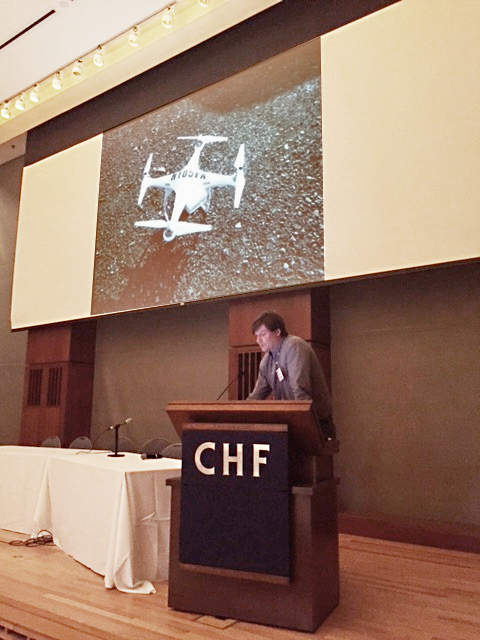 Other presenters demonstrated laser scanning, photogrammetry, nondestructive evaluation tools, hygrothermal analysis, and a host of digital applications to aid in the documentation of buildings and communication among team members. A common theme was the adaptation of technologies that were originally developed for other applications or industries.

Kristen presented an overview of potential drone applications for Vertical Access, including visual inspection of hard-to-reach areas, reconnaissance survey to identify areas for hands-on inspection, and as an aid to solve difficult rigging challenges. She also demonstrated drawings and 3D models created with photogrammetry using imagery captured by our drone.

Joe presented the wide array of unmanned aircraft and hardware available, as well as innovations that are likely to enable the large-scale commercial use of drones, such as sense-and-avoid technology, and low-altitude air traffic managment. He also discussed the roadblock to successful integration of drone technology with building investigations – the tangle of FAA regulations that severely restrict the commercial use of drones.

The workshop concluded with demonstrations, where attendees were able to see VA’s drone in action.